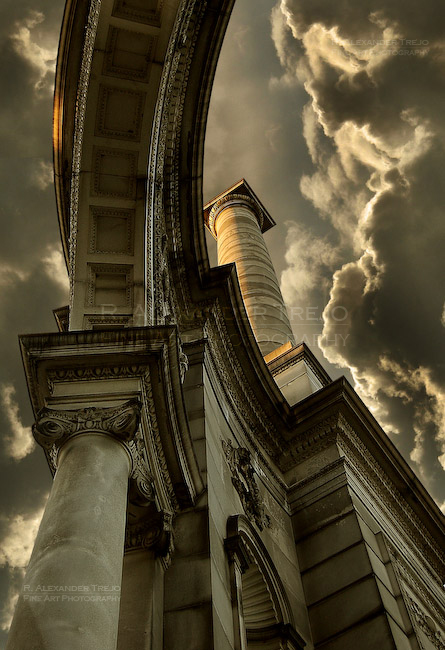 Magnitude.  Drama.  Mystique.  Romance.  Alexander Trejo captures these, and more, in his superlatively crafted image of this architectural structure found in Fairmount Park, Philadelphia. The perspective of viewing the massive curved stone wall from the ground looking toward the sky supports each key descriptor: Magnitude, given the structure stretching up, skyward, as if we were in the presence of a significantly spiritual place; Drama is created by the high contrast lighting, as well as the ground-to-sky perspective which adds grandeur to the scene even as the tightly cropped vertical orientation seems to push one’s eyes upward, upward past the very top of the architecture and into the celestial realm itself; Mystique is embedded in the whole of this photograph, because while certain sub-sections of the photo may speak of ancient Rome, or the stately churches of Europe, when one pulls back and looks at the whole, those identifiers seem less evocative of specific places and more universal; and Romance fills the sky with a voluptuous cloud formation that quite literally takes one’s breath away.  Symphony demands from viewers a sense of awe, and in that accomplishment, Alexander has found this photograph’s communicative power.